Many apps need to do background processing outside of the context of a web request. In this sample, the Bookshelf app sends tasks to a separate background worker for execution. The worker gathers information from the Google Books API and updates the book information in the database. This sample demonstrates how to set up separate services in App Engine, how to run a worker process in the App Engine flexible environment, and how to deal with lifecycle events.

This page is part of a multipage tutorial. To start from the beginning and read the setup instructions, go to Ruby Bookshelf app.

Go to the getting-started-ruby/6-task-queueing directory, and enter the following command.

Creating a Pub/Sub topic and subscription

The Bookshelf app uses Pub/Sub for a background processing queue of requests to get data from the Google Books API for a book added to the Bookshelf.

Running the app on your local machine

Now add some books to the Bookshelf. You can watch the workers update the book information in the background.

The worker establishes a Pub/Sub subscription to listen for events. After the subscription exists, events published to the topic are queued, even if there is no worker currently listening for events. When a worker comes online, Pub/Sub delivers any queued events.

When you're ready to move forward, press Ctrl+C to exit the local web server and worker processes.

Deploying the app to the App Engine flexible environment

If you update your app, you can deploy the updated version by entering the same command you used to deploy the app the first time. The new deployment creates a new version of your app and promotes it to the default version. The older versions of your app remain, as do their associated VM instances. Be aware that all of these app versions and VM instances are billable resources.

You can reduce costs by deleting the non-default versions of your app.

To delete an app version:

In the App Engine standard environment, you can stop the default version only if your app has manual or basic scaling.

For complete information about cleaning up billable resources, see the Cleaning up section in the final step of this tutorial.

This diagram shows the app's components and how they fit together.

This section walks you through the app's code and explains how it works.

To gather information from the Google Books API for books added to the Bookshelf, the Book class adds a task to the queue.

The preceding code creates an Active Record callback and specifies that after a book is created and saved in the database, lookup_book_details is called. If the book is missing any information, it adds the job, look up the book's details, to the queue.

LookupBookDetailsJob is an Active Job job.

The code passes self, referencing the book, to LookupBookDetailsJob.perform_later. This adds a job to look up the book's details to the queue.

You can configure Active Job to use a custom backend. For example, use delayed_job or resque, to add tasks to the queue. The Bookshelf sample app has its own custom backend, which is specified in the Application class.

The sample app adds a job to the queue by creating a subscription to a Pub/Sub topic, and then publishing the ID of a book to the topic. Once the subscription exists, messages are queued even if there is no worker currently listening. When a worker comes online, Pub/Sub delivers any queued events.

The preceding code uses the google-cloud-pubsub RubyGem to interact with Pub/Sub. The Cloud client library is an idiomatic Ruby client for interacting with Google Cloud services.

To process books added to a queue, a Pub/Sub subscription listens for messages published to the lookup_book_details_queue topic. This is covered in the worker section.

The sample app uses the Google API client RubyGem to look up book details from the Books API.

When a job runs, the LookupBookDetailsJob.perform method retrieves a list of books, based on a book title, from the Books API.

If a book volume result includes a title, author, and book cover image, then it is selected as the best match. Otherwise the first result is used.

If any relevant volume is found, the book details are updated and saved in the database.

A worker process handles book lookup jobs. To run the worker, you can run the following command, as specified in Procfile.

The run_worker rake task calls PubSubQueueAdapter to start a worker.

When the worker runs, it listens for messages on the Pub/Sub subscription to the lookup_book_details_queue topic defined in your config/settings.yml file. When a message is received, the associated book is retrieved from the database and the LookupBookDetailsJob runs immediately to update the book.

Even though the worker doesn't serve any web requests to users, or even run a web app, we strongly recommend that you provide an HTTP health check when running in the App Engine flexible environment to ensure that the service is running and responsive. It is, however, possible to disable health checking.

To provide a health check, the worker starts two processes instead of one. The first process is worker and the second process is health_check, which runs a simple Rack app that responds to HTTP requests with a successful response for health checks.

The app uses Foreman to manage multiple processes. The processes are configured in Procfile.

Foreman is now used as the entrypoint for the docker container. This is specified in the app.yaml and worker.yaml files.

Notice that Procfile contains an entry for the web frontend to run the Bookshelf Rails app as well. Because the default (frontend) and worker services share the same codebase, the FORMATION environment variable controls which processes are started. The following diagram contrasts the single module deployment on the left with the multi-module deployment on the right. 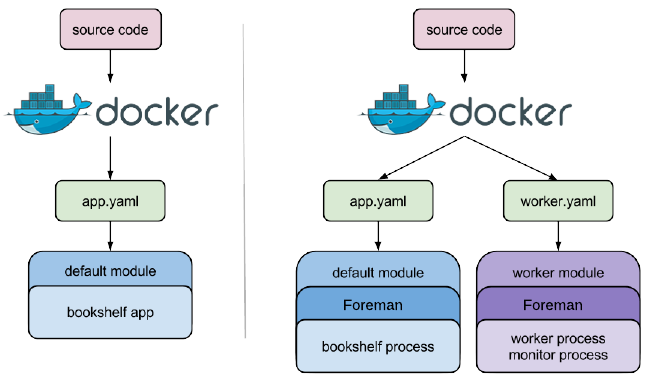 The environment variables are set by the app.yaml and worker.yaml files.

The worker is a separate module, so it needs its own YAML configuration file.

This configuration is similar to the app.yaml file that is used for the frontend; the key differences are the module: worker setting, and the FORMATION environment variable, which configures Foreman to run five workers and the frontend for the health check instead of the Bookshelf web app.

To avoid incurring charges to your Google Cloud Platform account for the resources used in this tutorial:

The easiest way to eliminate billing is to delete the project that you created for the tutorial.

To delete the project:

Caution: Deleting a project has the following effects:

If you plan to explore multiple tutorials and quickstarts, reusing projects can help you avoid exceeding project quota limits.

Delete non-default versions of your app

If you don't want to delete your project, you can reduce costs by deleting the non-default versions of your app.

To delete an app version:

In the App Engine standard environment, you can stop the default version only if your app has manual or basic scaling.

To delete a Cloud SQL instance:

To delete a Cloud Storage bucket:

Learn how to run the Ruby Bookshelf sample app on Compute Engine.

Try out other Google Cloud Platform features for yourself. Have a look at our tutorials.