This tutorial uses billable components of GCP, including the following:

Use the Pricing Calculator to generate a cost estimate based on your projected production usage.

Mender is an open source remote update manager for embedded Linux devices. The aim of the project is to help secure connected devices by providing a robust and easy software update process.

Some of the key features of Mender:

More information on Mender can be found here.

The following architecture diagram provides a high-level overview of the various components on GCP to enable OTA updates with Mender and Google Cloud IOT Core: 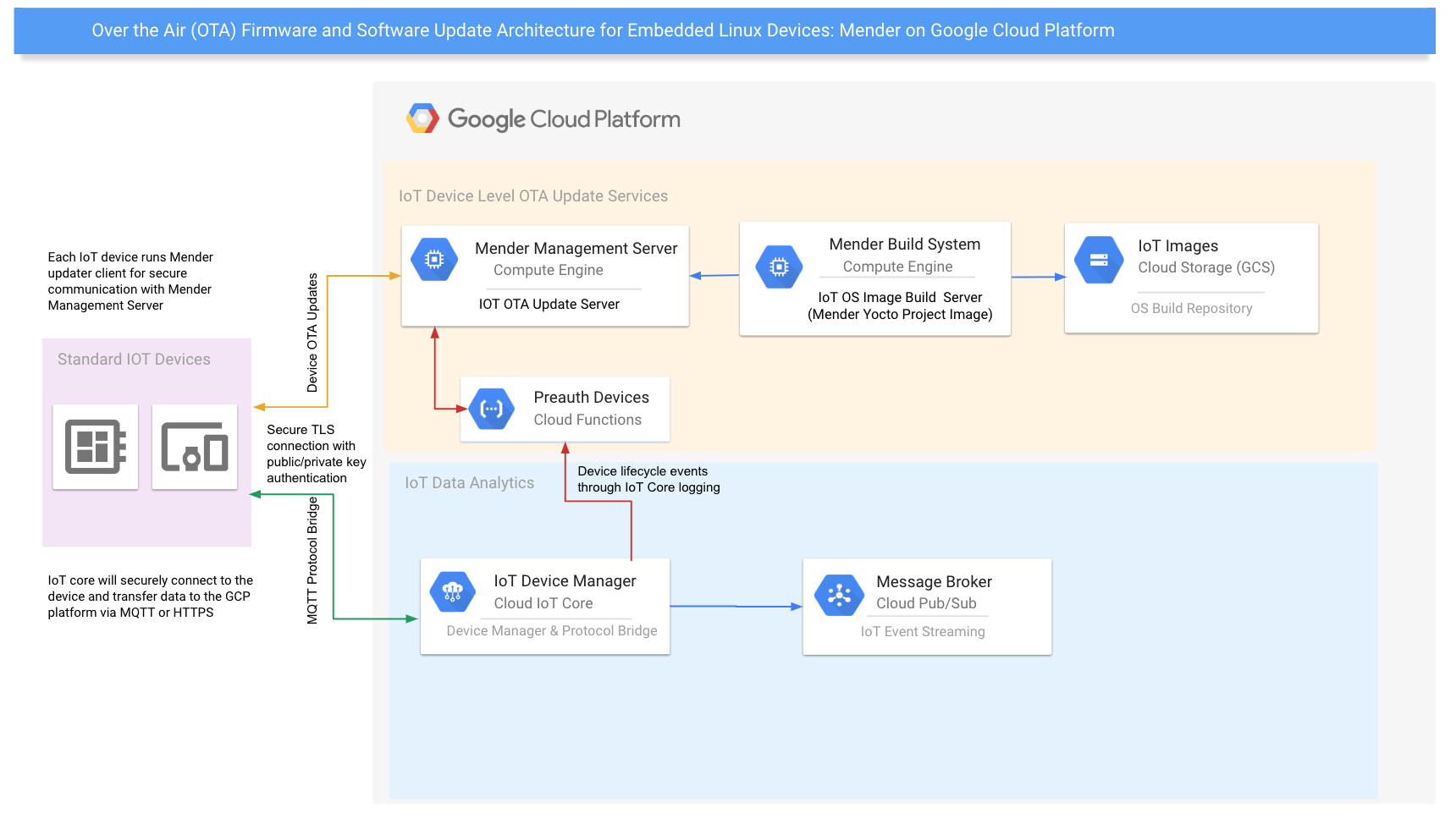 There are several options for successfully setting up Mender services with Google Cloud Platform (GCP). This tutorial will use a minimally configured Mender Management Production Server to test the end-to-end workflow:

Preparing the project and shell environment

Mender Management server requirements from Mender are outlined here. We will be using the base instructions as documented for setting up a production environment and deploying on Google Cloud Platform. However, this is minimally configured and not suited for actual production use.

The next section describes how to use a Yocto Project image for a raspberry Pi3 device.

This section outlines the steps involved in configuring and working directly with provided prebuilt images.

If you would like to learn how to build your own images on GCE with Yocto, see these extra instructions.

To flash this image, we need to switch back to your local machine.

You can use gsutil on your machine as suggested by the update script's output, or download this updated image from the console from the storage browser; it will be in the [project]-mender-builds folder.

Note: You may also want to use the Etcher GUI tool instead of the ddcommand line tool outlined below.

Next, you will configure the device to connect to Mender Management Server and Cloud IOT Core with the same private/public key pair.

This section outlines the steps to connect the Mender Client (running on a Raspberry Pi3 device) to Cloud IoT Core as well as Mender Server using the same public/private key. Additionally the steps will deploy an OTA update to the device remotely as depicted in the diagram below. 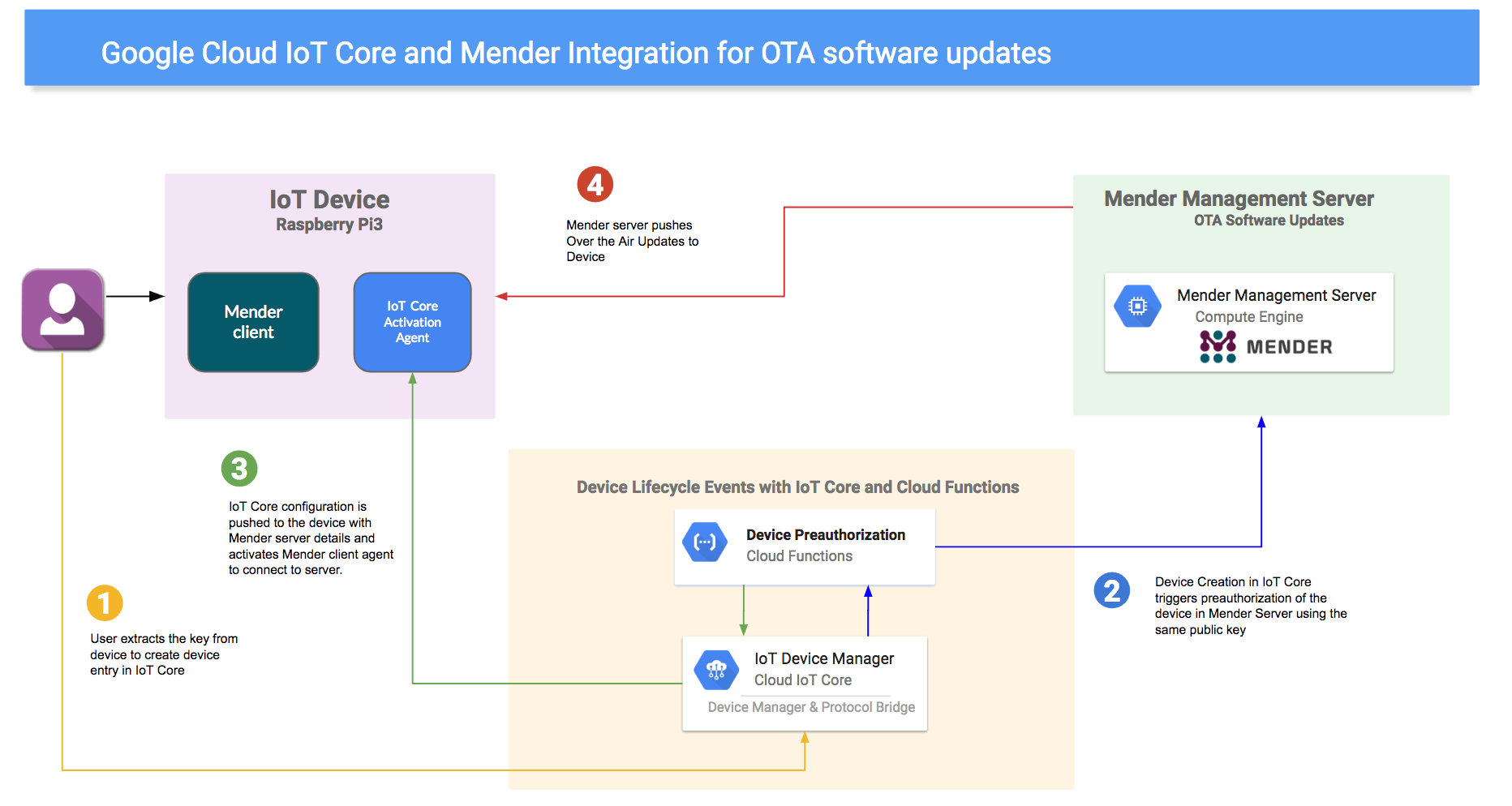 Key components you will use in this section:

Using the Cloud Shell environment, create a Cloud IoT Core registry and Cloud Pub/Sub topic for this tutorial that will be used for the device to authenticate and send telemetry data.

Using the Cloud Shell environment, you will configure Cloud IoT Core audit logs to route to a Cloud Pub/Sub topic.

This will link device creation in Cloud IoT Core to Device preauthorization in Mender.

Note: Be sure you associated Firebase with your Cloud project as noted in Before you begin.

Deploy Firebase Functions to subscribe to the registration-events Pub/Sub topic that you created in the last step to preauthorize IoT Core Devices with the Mender Server every time a new device is created in Cloud IoT Core.

Using the repo you cloned into Cloud Shell earlier, switch to the functions directory:

Let's set the environment variables for the functions. Replace the IP address for mender.url with the external IP address of your Mender server.

Note: You may be prompted to verify your compute instance zone, the default may be incorrect, so answer n.

Let's bring up the Raspberry Pi device and extract the public key, so you can create a device in the Cloud IoT Core registry. The same private/public key pair will be used to authorize the device in Mender Server as well.

We use a random ID generated by the OS on first boot as our device ID in Cloud IoT Core. This can be adapted to any potential HW based identifier such as a board serial number, MAC address, or crypto key id:

Note: You will be prompted several times for the root password, which is mender_gcp_ota.

Extract the public key from the device:

Now create a Cloud IoT Core Device with the public key (rsa_public.pem), which you extracted in the last step (please make sure you are in the same directory where you have extracted the rsa_public.pem file). Run the following command from the same local console or terminal where you have ssh access to the device. You may need to set your project in gcloud first.

Note: If you do not have gcloud installed locally, you can create this device in the GCP Console.

This may take a couple minutes, because the client on the device has backed off from constantly trying to reconnect to Cloud IoT Core. You can monitor the Cloud IoT Core console Configuration & state history pane to see when the config has been pushed and acknowledged by the device.

You can confirm the same from the GCP Console as shown below under device details.

Now open the Mender Management Server, and make sure you are able to see that the device is authorized and able to communicate.

Sign in to the Mender Server that you created part of the earlier steps: Mender Management Server on Google Cloud. Click Devices to make sure you can see the Raspberry Pi 3 device as shown below. 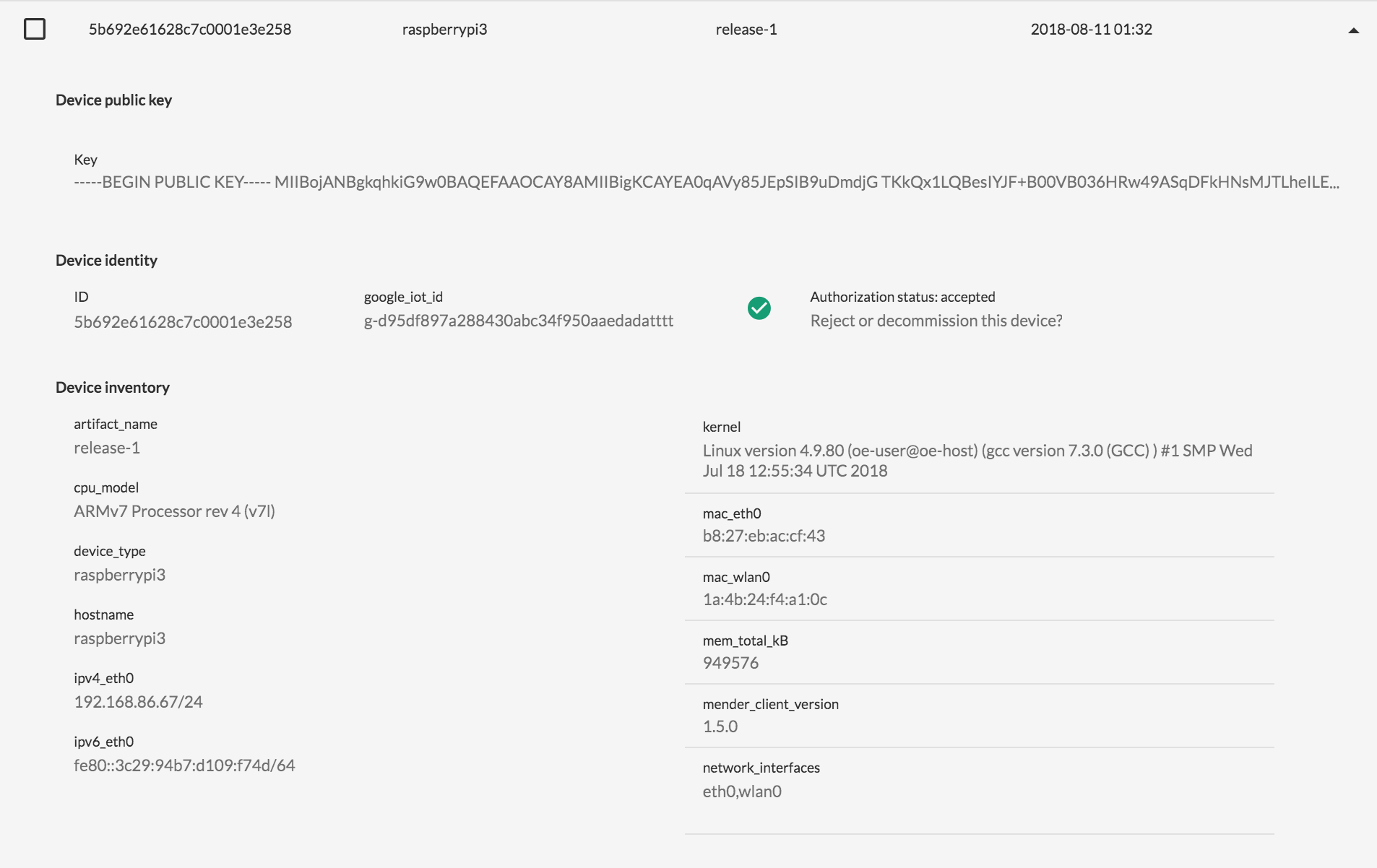 This confirms that the device has successfully connected to Cloud IoT Core and Mender Server with the same private/public key.

As part of the last step, let's perform an over-the-air (OTA) update by deploying a Mender artifact from Mender Server to the client. The Mender artifact includes a software update of MQTT for Google Cloud IoT Core example, which will be deployed and executed on device boot.

Create a subscription that we can use to verify this sample gets deployed:

Next, you need to create a deployment and select the device to which you want to deploy the artifact. From Mender Server, click Create Deployment, and select the target artifact as release-2 and group all devices. Click Create deployment. You only have one device currently, which is Raspberry Pi3. For various classes and types of devices that Mender supports, you can create groups and apply the target artifacts accordingly (Raspberry Pi3, Beaglebone, etc.) 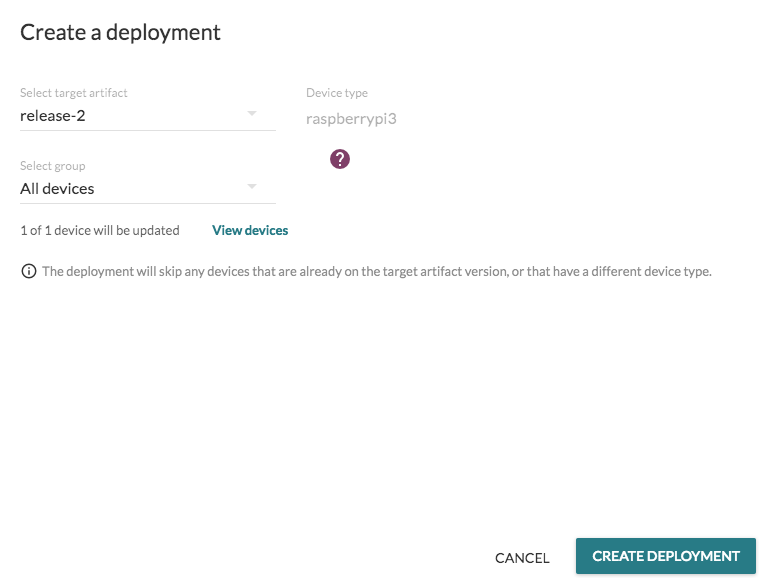 While the deployment completes, you can verify that the current image is not sending data:

Deployment completion may take some time, as the update agent checks in periodically and writes the updated partition. Progress can be monitored from the Mender Server Dashboard by clicking In progress deployments.

After the deployment is finished, you should be able to see that the deployment is successful from the Mender Dashboard, and the new release of the software update should be deployed on the device, which can be confirmed by logging into the device and running mender -show-artifact. This should output release-2. Additionally you can confirm the telemetry events are being sent by the software update by repeating the pull command: 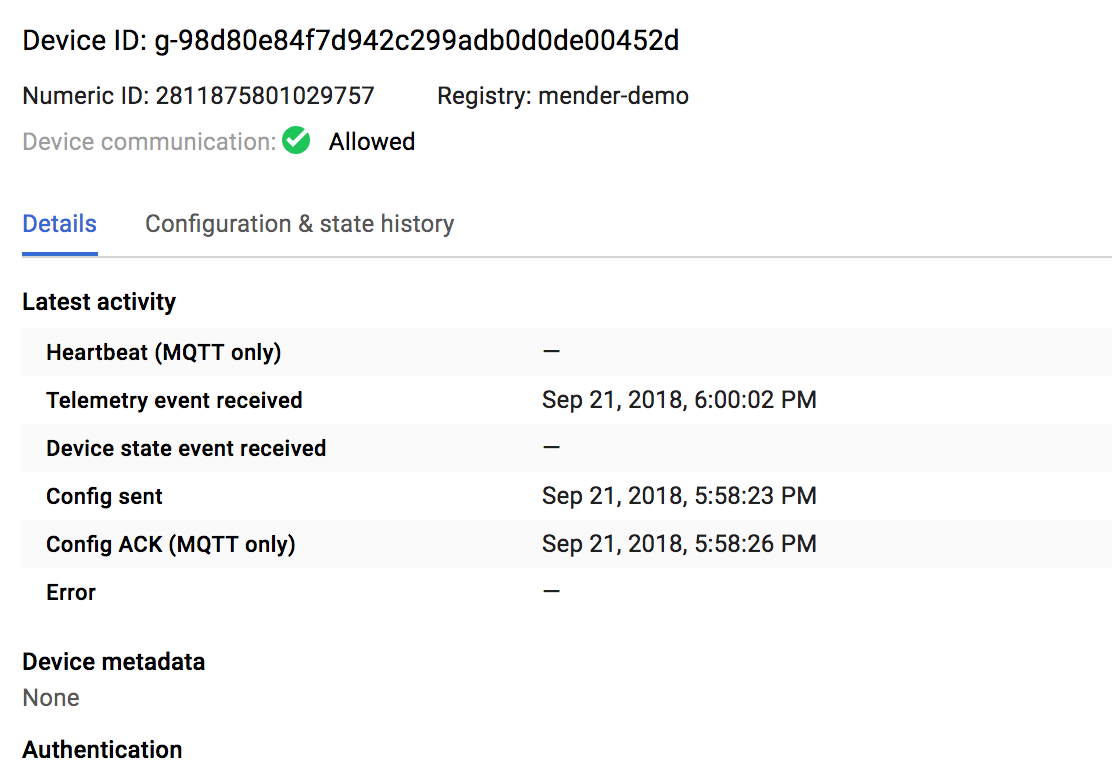 This completes the tutorial where you have successfully deployed a Mender OTA solution on Google Cloud Platform, including building a Mender Yocto custom embedded OS image for a Raspberry Pi device, and integrated with a Cloud IoT Core solution.

Since this tutorial uses multiple GCP components, please be sure to delete the GCP resources after you are done with the tutorial. Ideally, you have done this tutorial in an ephemeral project created just for this tutorial, which allows you to clean up resources simply by deleting the project.

If you would like to see how to further update the images by modifying the device software and doing an additional deployment, see the extra instructions on building your own images.